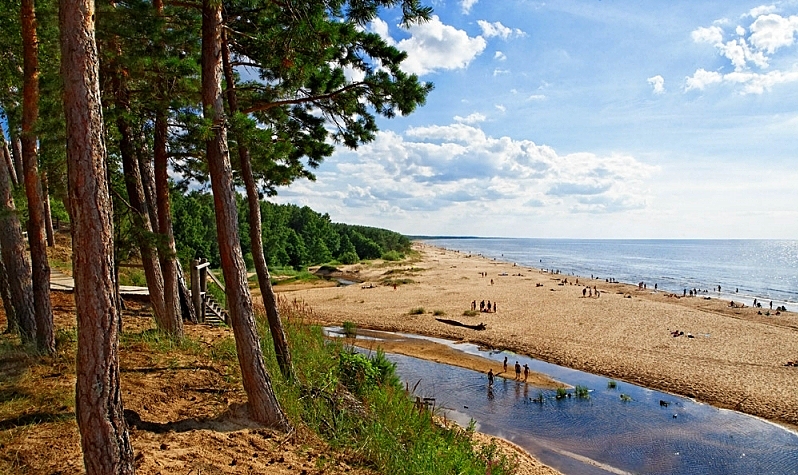 Saulkrasti is located in the northern part of Latvia in the region of Vidzeme (past times’ Livonia), 50 km north of the capital Riga positioned along the Baltic coastline half way between Riga and the Estonian border in North Eastern Europe. Flight distance from Saulkrasti to various capitals in North and North Eastern Europe are as follows: Tallinn 250 km EST. Stockholm 400 km SE, Helsinki 300 km FIN. Vilnius 350 km LT, Pskov 270 Km RUS, Novgorod 300 km RUS, Minsk km 300 BY, Saint Petersburg 490 km RUS, Moscow 800 Km. RUS, Kiev 800 km, UE, Copenhagen 750 km DK, Warsaw 650 Km. Pl, Berlin 850 Km DE There are daily flights to all major cities, well-developed infrastructure to the nearest Russian cities and the other Baltic capitals. Flight time to all mentioned destinations are between 40 – 80. minutes. Riga Airport is the largest airport in the Baltic region and serves as a regional hub with more than 4 million passengers annually and offers direct flights to more than 60 destinations. Riga and Stockholm is linked by a passenger ferry offering daily departures. Busses between all Baltic and Russian cities are frequent and cheap. The infrastructure between the Baltic capitals are well developed, they are all linked via the highway via Baltica.

How to get her

From Riga airport, you only have one hour’s drive, by public transport one a half hour. Busses depart every hour from the central bus station in Riga. Catch the bus direction Ainazi and get off at Koklites only 3 min’s walk from Villa Neubad. You can also catch the electric train from Riga Central Station direction Saulkrasti or Skulte, get off at Saulkrasti and we will pick you up. 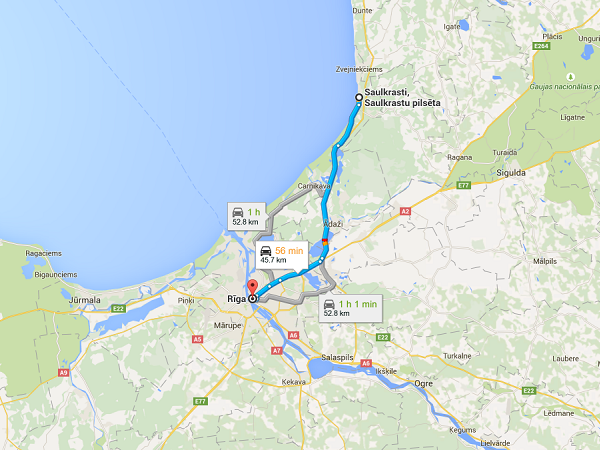 The area and city of Saulkrasti

Saulkrasti Beach is a 17 km long natural beauty where you can witness the rich diversity from the singing sand in Lilaste to the stony shore of Zvejniekciems surrounded by old pine forest. The beach is swept by wind and shaped by waves, gathering sand and various nature treasures. Among them the white dune of Saulkrasti one of the most beautiful dunes of its kind in Latvia with a great sight to the Gulf of Riga. The White Dune is a natural sandstone layer, formed 405–350 million years ago.

Saulkrasti is a small village with a population of around 6000 inhabitants and a typical summer holiday resort on the Baltic coast.

The name of the city is Saulkrasti which means sun coast referring to the high average of sunshine hours compared to the rest of Latvia.

The name “Villa “Neubad or new bath in English derives from the old German name for the city which lasted till 1933. Neubad was a thriving place for the Baltic-German elite who enjoyed the clean water, old pine forests and some of best air in Northern Europe

In 1940 Latvia became part of USSR and Neubad changed name to Saulkrasti n became a holiday resort for Russian bureaucrats and loyal workers.

Latvia gained its independence again in 1991 and after a turbulent period of transforming the state into market economy, Saulkrasti is slowly but firmly waking up, finding its feed in the new realm as a European state between east and west.

At Saulkrasti and the surrounding area you will find a unique blend of cultural heritage; Soviet time purely kept dachas from the 70s, old wooden houses from Imperial tsarist times go hand in hand with today’s luxury villas – a pretty rare sight

In Saulkrasti you find all you need for your daily stay including 4 supermarkets, cafés, restaurants and pubs. The nearest café and dining place is Koklites only 200 meters from Villa Neubad, beautifully located on the beach.